Titus Learning at the 2017 Moodle Moot

Titus Learning co-founder and director Seb Francis attended the Moodle Moot UK and Ireland 2017 on the 10 – 12 April at the Park Plaza Riverbank London. Here, he shares some of his thoughts on the event. 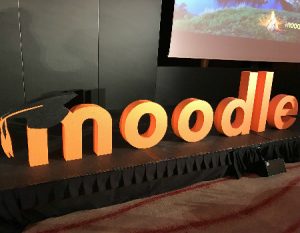 Last week I attended the Moodle Moot in London alongside hundreds of other Moodle users, providers, and the HQ team themselves. The Moots initially started out as a community driven event to share ideas, development projects and an opportunity for improving your knowledge of all things Moodle. Since the early days of the Moots being purely community led, the HQ team have joined forces to bring an extra dimension to the event, leading a number of sessions themselves, and showcasing some of the work coming directly from HQ.

This year’s Moodle Moot was opened with a great keynote from Gavin Henrick, with news of what’s been released in the past year, what we can expect in Moodle 3.3, and asking the delegates directly how they’d like to see Moodle progress and develop. We had a drop in from the big man himself, Martin Dougiamas, via Skype, who was also around to chat virtually with the delegates over the few days of the conference.

I managed to attend back to back sessions (even with a slightly sore head on the Wed!) from a range of presenters, and picked up some great ideas of how the different institutions are using and customising Moodle. From the HQ team themselves there is obviously a huge push to improve the usability and general UI/UX of Moodle. This is apparent with the release of the Boost theme based on Bootstrap 4, and focusing on ease of use, as opposed to new features, for 3.4 coming later in the year. The sessions on the Moodle mobile app, and global search led by Juan Leyva and Dan Poltawyski respectively, were very well attended (I had to sit on the floor!), and are proof of how keen people are to utilise Moodle in more places, whilst saving time.

Becky Barrington from Cornwall College did a great session on improving the usage and adoption of Moodle among staff. In her own words, when speaking with staff about Moodle the response was much more ‘Uuuhh’ than ‘Oooh’ (even if I can’t go as high pitched as Becky did!) and that was something she was determined to change. She started by understanding more about individual departments, and matching certain Moodle features to their requirements, rather than trying to blanket the same approach over all tutors.

This led to great early results but she knew she needed to scale it across more staff. When they introduced a new Student Information System (SIS), she worked with the Management Team to push training for this via Moodle. This immediately showed staff what was possible with Moodle and she soon got the question she wanted: “can we do that in Moodle for our own students?”. Finally, she looked at which other plugins and systems could be used alongside Moodle to make the tutor’s lives easier, and the students more engaged with the content.

Introducing systems like H5P (which we’re a huge fan of – check our post here) got tutors creating quick, easy and fun content which seamlessly integrates with Moodle. The work Becky did at Cornwall College should certainly be used as a model for other institutions looking to improve their Moodle usage.

The Chair of the Moodle Users Association (MUA), and the eLearning Lead at ISS Lancaster University, Steven Powell, gave us a ‘year in review’ of the MUA and the great work they’ve already done. Only a year since its creation, we are soon to see the ‘My Course Overview’, and have some other great ideas in the pipeline. What’s more impressive is how they’ve proved the concept of having a community led platform to suggest, vote, and develop new technologies, and it’s very promising for the future of Moodle. If you’re not yet a member of the MUA, or a little unsure of how it works, I’d definitely recommend checking out the website.

I had the pleasure of meeting Justin Hunt, who is the wonderfully talented developer of the suite of PoodLL plugins (I told him to look out for the chap with an afro and a Titus t-shirt… I think it took him a whole 37 seconds to find me!). I’ve been aware and played with the PoodLL plugins for a number of years, and it was great to meet the guy behind it. If you’re looking for a way to enhance the type of submissions you can receive from students (audio clips and recordings), or a way to jazz up your Moodle course (with the button creator), then the PoodLL plugins are perfect. We’re going to be doing more work with Justin so if you want to find out more just give us a shout.

The Moot was also a great opportunity to showcase some of the work we’ve been doing for our very own clients, and get feedback from the biggest and best in the Moodle community. We’re super proud of the development work we’ve done, whether that be our custom Titus theme, the plugins we’ve created for event management, CRMs or even payment gateways, plus more. Hearing those in the know say positive things about what we’re doing was really encouraging encouraging and makes it all even more worthwhile.

Last but not least, I came away from the Moodle Moot having met a whole bunch of great people, who I hope to keep in touch with both at and outside of the annual pilgrimage to the Moot!

So I’ll wrap it up there (and apologies to those I met and have not mentioned), but whether you attended or not, it’d be great to hear anything you have to add to what I’ve written. The Moodle Moot is certainly on the agenda for future years and I’m already looking forward to 2018!