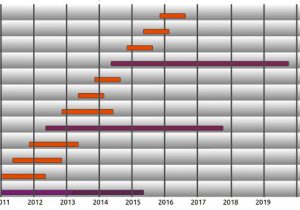 Whilst new releases continue to take place during the time the LTS version is supported (including feature releases, security and bug fixes), there is commitment from the developer that new features or regressive code will not be added to the LTS version.

Firefox, Ubuntu and Joomla are all examples of well-known open-source software that have LTS versions. There is a useful article and timeline on the LTS policy for Ubuntu here which, although the time-scales for Moodle are slightly different, the graph demonstrates quite nicely the overlap we will see in version support.

In Moodle’s case, the usual support cycle for a major release is 12-18 months, whereas for Moodle 2.7 this will be 36 months (see the Moodle 2.7 release notes):

Moodle users now have a choice – whether or not to standardise on one version of Moodle (2.7) for a number of years at the expense of major developments and added features (in Moodle 2.8, 2.9 etc).

[button link=”https://www.tituslearning.com/5-reasons-running-moodle-19″]Check out our blog post on Why so many Moodle sites still run Moodle 1.9[/button]
Are the the reasons you are still running Moodle 1.9?

The Reasons behind LTS

So what does Long Term Support for Moodle actually mean?  The practice of issuing a LTS version has at it’s roots a couple of main objectives.  Historically, with any software release comes the potential to introduce new bugs, despite the likelihood that the developer is probably trying to fix at least some previous bugs in the software with the new release. Such bugs can and do cause problems and are regularly fixed with minor incremental upgrades (Moodle 2.6.1, 2.6.2 for example).

The introduction of bugs in Moodle is kept to a minimum however with a strict QA process and the help of community testers, running different set-ups, to catch anything that might have slipped past the core developers. Moodle 2.7 had a 100% successful QA pass rate.

Another driver for a LTS release, and certainly the main reason behind Moodle 2.7 being given LTS status, is stability. Not software stability, but the ability to plan and be prepared for implementing upgrades.

Upgrading core or critical software (which Moodle definitely is for Institutions throughout the world) is time consuming, fraught with concern and if too regular becomes a burden.  In each case of carrying out an upgrade, the administrator needs to be confident that functionality that existed before is still in place (and it works), that third-party plug-ins have been updated to be compatible, that the changes are not so drastic that users will be confused and that any training needed can be accommodated.  Very simply, Moodle cannot be upgraded if the administrator doesn’t have confidence that after the upgrade the system will be as usable as it was before.

[button link=”https://www.tituslearning.com/moodle-27/”]Click to read if Moodle 2.7 is the version you have been waiting for[/button]

The Benefits of LTS

A LTS release overcomes many of these concerns in one fell swoop. The upgrade to LTS can be planned and there can be confidence that with extended support in place only required updates and security patches will take place during the prolonged support period. There will be no more confusing (albeit useful) new features for users to get to grips with and compatible blocks will remain compatible during that version’s use.

Those institutions that develop their own plug-ins, or those that have wanted to develop a feature but have been put off by the requirement to keep it constantly updated, could also benefit from a policy decision to standardise on a version they know will be suitable for up to three years.

At it’s core, the Long Term Support release gives Moodlers another option that has been sorely missing in the past.  If users wish to keep up-to-date with the latest features, they can continue to download new releases and upgrade their site every six months. Even those that wish to keep their site secure with official releases, but don’t feel the need to upgrade for every new feature, can continue to benefit from the usual security releases and upgrade every 12-18 months. However, for those that may need to plan further ahead, or where performing an upgrade is more of a burden than a pleasure, being able to have version stability for 3 years is an option that could well appeal.

[button link=”https://www.tituslearning.com/contact-us/”]Get in touch for information about our services, including Moodle hosting, support and upgrades[/button]

Shopping Basket
Manage Cookie Consent
To provide the best experiences, we use technologies like cookies to store and/or access device information. Consenting to these technologies will allow us to process data such as browsing behavior or unique IDs on this site. Not consenting or withdrawing consent, may adversely affect certain features and functions.
Manage options Manage services Manage vendors Read more about these purposes
View preferences
{title} {title} {title}