Some thoughts on the BETT Show, London 2015 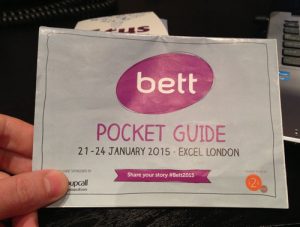 This year was a little different for us – having been to BETT a number of times as exhibitors in the past I had the pleasure of enjoying the show purely as a delegate for the first time. BETT is the world’s largest education technology show and it was great to have the freedom to meet potential customers from around the globe without feeling the need to stay on your stand for four full days. It’s definitely the case that visiting BETT as a delegate is a completely different experience to that of an exhibitor!

So, what other themes did we notice from this year’s visit?  As with a lot of other posts you might read about BETT, much of what is shown at the show is very familiar. It was pleasing to see the ‘BETT Futures’ arena, a subsidised area for new start-ups looking to introduce their software to the public for the first time. But outside of this small area, cost continues to be a barrier to those smaller and innovative companies that struggle to make an impact at such a huge event. It means that truly uncovering something unique at BETT is becoming harder with each visit.

Other than our scheduled appointments our focus as delegates was directed at the Learning Platform (VLE / LMS) providers – it’s always useful to gather experiences from other companies and it’s pleasing that generally company owners are open to discussing the current state of play.

With a lack of quality Moodle provision at the show we discussed with other VLE providers their opinions of different systems and what makes them unique.  It was great to hear that areas we focus on with Moodle, namely simplicity and usability, are the key selling points of most other systems.  It was a real boost to see that we can go head to head with other providers, who might be better known, for functionality, usability, design and service on the back of market-leading and sustainable open-source software.

We left BETT feeling more confident than ever before that a managed and tailored Moodle, correctly configured and implemented is still the best choice for schools looking to change their learning platform or implement a VLE for the first time.

One thing that BETT never fails to deliver is the opportunity to catch up with old friends, colleagues and contacts – in the UK it’s the de facto place to be for networking. This year once again gave rise to re-establishing contact with those who we hadn’t seen since last year, as well as fantastic opportunities to meet some industry movers and shakers for the first time.

What is pleasing about BETT is that it brings together people you might otherwise struggle to meet with in one place. We had a number of meetings this year with UKTI trade advisors who we know well from numerous emails and phone calls but had never actually met in person.  Such meetings, although brief, help to cement those relationships and to keep the communication flowing in both directions. It was also nice to be able to thank them personally for their help and support.

As a BESA Launchpad member, it was also a great opportunity to meet with a number of the Executive Council members and to share our successes of the past year with them. I had the pleasure of participating in the ‘Ask an Expert’ session where those in need of advice could come to the BESA stand for a candid chat and glass of wine. We were also afforded a fantastic session with BESA’s Executive Council Chairman, Andrew Thraves, who has a wealth of experience and is a great sounding board for our ideas. Andrew was enthusiastic about what we are doing and we’ve agreed to keep in touch on a regular basis.  It was really pleasing to see the likes of Andrew, Stuart and David (also from the Executive Council) more than happy to discuss their experiences and offer timely advice.

Exhibiting at BETT is something we’ll be considering carefully for next year, however the experience as a delegate was such a good one we might be tempted to push that off into the future as long as possible.  Until next year, our focus will be on supporting our member association events Internationally which give us a platform to meet with existing and potential customers alike – keep an eye out for updates about where you can see us in the coming months.