Moodle 2.7 – the version you’ve been waiting for? 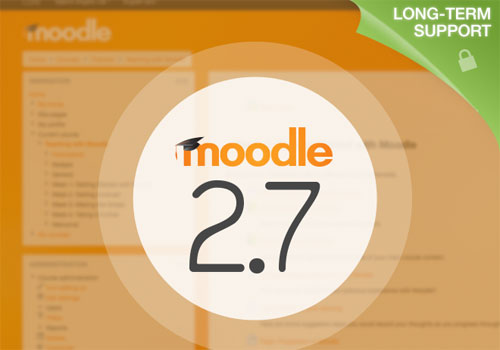 With Moodle 2.7 being released yesterday, Moodle users and site administrators will once again be looking forward to the new features, improvements and bug fixes that are available in the latest release.  Early feedback from the community appears to be enthusiastic about this release.

Moodle 2.7 brings a few headline feature improvements, including the replacement of the TinyMCE editor with ‘Atto’ and the continued emphasis on responsive design with ‘Clean’ the default theme and the new ‘More’ theme being released. Compared to a number of earlier Moodle releases though, some might question whether there is a compelling reason to upgrade to Moodle 2.7 (especially if you have only recently upgraded to Moodle 2.6).

But is this the Moodle 2 version you have been waiting for?  Perhaps you still run a 1.9 site, or upgraded to 2.2 and haven’t wanted to consider another upgrade just yet.  If that’s the case, consider one of the main reasons to upgrade to Moodle 2.7 is the commitment of Long Term Support for 2.7 from Moodle HQ.  What is Long Term Support  and why is this different to other Moodle releases?

Click to view our article “What is Long Term Support?”

This is what Moodle HQ have to say in the release notes:

This is the first official Long Term Support (LTS) release for Moodle. As a bit of background, development of the 1.9 branch was, to be kind, slightly unpredictable, with releases taking place at intervals that matched key development milestones rather than at timely intervals.

With the release of Moodle 2.0, a commitment was made to structure releases in a much more predictable manner, with the 6 month major release cycle introduced (major releases, 2.1, 2.2, 2.3 etc, taking place twice a year, with minor releases in between).

The introduction of the structured release cycle was meant to alleviate concern that planning for upgrades in the past was difficult, that companies supporting their Moodle customers (and of course users running their own installations) couldn’t anticipate when releases would take place. However, in an unforeseen twist, the now very regular releases are a burden for some users who simply struggle to keep up with the latest versions, or see it as a reason to stick with what they know.

Whilst there will always be those of us that want to upgrade to the newest version at the earliest opportunity to play with the shiny goodies Moodle have released (and to be honest, we’re in the camp that will grab the latest beta version for testing ourselves as soon as it’s available) the continuous upgrade cycle is obviously off putting for some.

So, what will Long Term Support for Moodle 2.7 mean in practice, and why could this be the version you’ve been waiting for before biting the bullet and getting that upgrade planned?

Firstly, for those users that are still using Moodle 1.9, LTS provides a true opportunity to upgrade to Moodle 2 safe in the knowledge that if they don’t wish to carry out another major upgrade for the next 3 years, they will be covered by bug fixes and security releases in that time. Also, for those users that have been choosing carefully which releases to upgrade to (and perhaps skipping some releases to keep the number of upgrades to a minimum) LTS also provides them with an opportunity to standardise and plan the features and version they will have available for a significant amount of time.

Consider this: during the time that Moodle 2.7 will be officially supported there will be a further five major releases, assuming Moodle continue with the current 6-monthly release schedule.  Will we see Moodle 3.0 in this time (there is currently no official roadmap for Moodle 3.0) or will this period see us whetting our appetite at the upcoming niceties Moodle 2.8, 2.9, (2.10?) and beyond will provide?

We can therefore celebrate the commitment from Moodle HQ to support Moodle 2.7 until June 2017 as a great option for the significant portion of the user base that are less inclined to enter the cyclical nature of major upgrades. For those that want, or need, more stability, less interruption, minimal staff retraining and updating of training resources, a LTS version provides exactly what they are looking for in order to plan their usage for a number of years.

It remains to be seen just how popular 2.7 LTS will be and whether this is what the trench of 1.9, 2.1 and 2.2 users have been waiting for to savour the delights latter versions of Moodle 2 offers. What is clear though is that, with Moodle 2.7 aiming to be the best release yet (according to Moodle HQ it is), now is a great time for those yet to make the jump to commit to the Moodle 2 branch and we expect to see a swing in the number of registered Moodle 2 sites overtake the 1.9 sites during 2.7’s tenure.

[button link=”https://www.tituslearning.com/contact-us/”]Contact us for information about our services, including how we can help upgrade your site to Moodle 2.7 or manage your Moodle server (never worry about an upgrade again!)[/button]