Issues We Care About 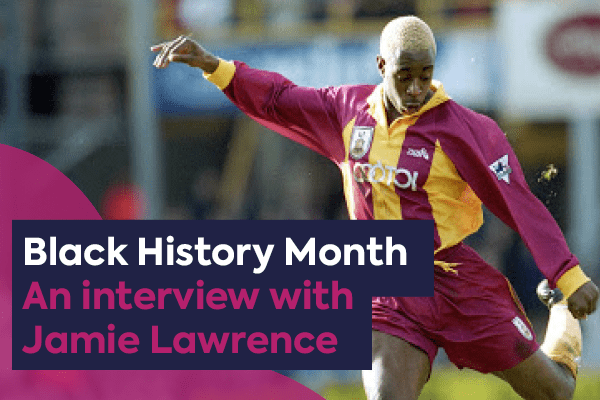 In this series of interviews, we’ll be speaking with influential members of the black community. We hope that by doing this we have the opportunity to broaden our own knowledge as well as creating meaningful conversations by sharing their stories and experiences with our network.

Following our interviews with Marvina Newton and Isaac Eloi (which you can watch here), we’re proud to feature ex-professional footballer and Bradford City legend Jamie Lawrence.

For football fans, Jamie needs no introduction. But for those who may not have come across him before, he’s a former professional football player who played for various teams, including Bradford City from the late-90’s to the early 2000’s, making 155 appearances. He also played for the likes of Leicester City, Brentford and the Jamaican National Team.

After retiring from football, Jamie has been outspoken about the racism he experienced whilst he was playing professionally, and how it still persists in the modern game. Speaking to the Telegraph and Argus in 2019 he recalled how he had even experienced racism from fellow players, and was warned ‘that speaking out would only make trouble’.

In the interview, Seb and Jamie speak about his complicated start to life, the racism he experienced as a footballer as well as touching on his work and charity initiatives.

As a Bradford based business and home to many Bradford fans this was an incredible opportunity to speak with Jamie. We hope you can enjoy it as much as we did below, and again we hope that it can stoke conversations about race with your own network.

Watch the interview below: